I fell in love with Faith Hunter’s words when I discovered my first Jane Yellowrock. Then I bought the next one and the next …
I hadn’t considered myself a fan of urban fantasy. Ha! I’d written plenty of fantasy novels, and even penned an urban horror-fantasy, but in my to-be-read stack the real world and fantasy didn’t mix.

But there was Faith and Jane.

When I was invited to contribute to a Faith Hunter anthology I didn’t hesitate to say YES. Learning that it was not for a Jane Yellowrock, I was a tad worried. I wasn’t familiar with her Rogue Mage world, but I wasn’t gonna let that stopped me. I connected to Amazon and ordered Host, Bloodring, and Seraphs. And was wowed. Faith demonstrates how amazing it is to play with the real world, to twist it and shape it into something wonderful and frightening.

She has the “what ifs.” Andre Norton was a dear friend of mine, and when we’d chat on the phone the conversation invariably drifted to the “what ifs.” We’d talk about something going on in the world, often about archaeological discoveries, and she’d say “what if…” What if the bones unearthed weren’t wholly human, but only looked that way on initial inspection? What if the latest skirmish in Yemen wasn’t a grab for territory or in the name of religion, but was merely a distraction because something or someone from another time needed to go undiscovered? What if? And what if? And what if? 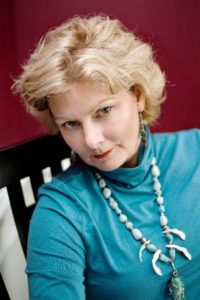 Faith has mastered the “what ifs” and created worlds around the concept.

It was easy to slip into her Rogue Mage world with my own tale because Faith left open enough windows and doors to expand her setting… let other writers take a brief walk without ruining anything she’d already set down.

I picked the Amazon basin because the area fascinates me. I have a thick book detailing the history of explorations along the river and tributaries, a perfect springboard for fiction. So I was able to meld the real with the unreal… Faith’s Rogue Mage world with the dark parts of the basin, throwing in a dash of archaeology and poetry. That story became part of the Rogue Mage e-book anthologies, Trials and Tribulations, and the trade paperback omnibus, Triumphant. So while I’m writing the Piper Blackwell mystery series now, my first love was fantasy.

About FLAME IN THE DARK:
Nell Ingram has always known she was different. Since she was a child, she’s been able to feel and channel ancient powers from deep within the earth. When she met Jane Yellowrock, her entire life changed, and she was recruited into PsyLED—the Homeland Security division that polices paranormals. But now her newly formed unit is about to take on its toughest case yet.

A powerful senator barely survives an assassination attempt that leaves many others dead—and the house he was visiting burns to the ground. Invisible to security cameras, the assassin literally disappears, and Nell’s team is called in. As they track a killer they know is more—or less—than human, they unravel a web of dark intrigue and malevolent motives that tests them to their limits and beyond. 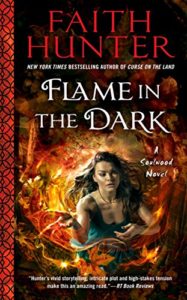 One of the paramedics in the street got back in the EMS unit and it moved again, this time turning at a sharper angle to the Carhart Building. Yummy landed on all fours beside me, like a praying mantis. I squelched a squeal and Yummy laughed. She was enjoying this.

Without even thinking, I reached out, grabbed her shirt, and yanked her to me. Her face was two inches from mine. All vamped out. Fangs down, eyes blood red with huge black pupils. “That cop got injured,” I said.,“Protecting this city and your’n boss. How ’bout you’un get in there give her some blood instead of playing games?”

“Take your hand off me, little female.”

Yummy’s eyes went even wider. Surprised. She tilted her head in one of those creepy inhuman moves they do and looked at the EMS unit. The driver was scrunched down in his seat, making a small target; the other two responders were loading the wounded officer into the back of the glorified ambulance. “JoJo,” I said, “tell EMS that a vampire is about to join,” —I stretched my own head to see the number stenciled on the van, —“unit two-fourteen, to offer her services as blood donor.”

“I’ll pick you up at UTMC,” I said to the vampire.

“I think the appropriate response is ‘Cry me a river.’” I let go of Yummy’s shirt. “Move.”

FLAME IN THE DARK ON AMAZON