Fantastic Fantasy with an Urban Flair 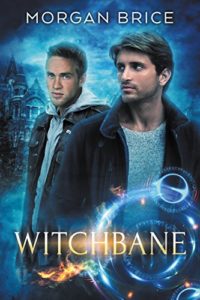 Witchbane reads fast, the story moves, and the writing is smooth. A master of urban fantasy, Gail Z. Martin and her other-persona Morgan Brice stopped by on the Witchbane blog tour for a Q&A.

Here’s the quick recap for Witchbane: Seth Tanner and his brother Jesse’s fun evening debunking local urban legends ends with Jesse’s gruesome murder. Seth vows revenge on Jesse’s killer–too bad the murderer has been dead for a hundred years. Seth uncovers a cycle of ritual killings that feeds the power of a dark warlock’s immortal witch-disciples, and he’s hell bent on stopping Jackson Malone from becoming the next victim. He’s used to risking his neck. He never intended to risk his heart.

You use real-world places in your paranormal tale. Of all the spots in the book, what building or site was your favorite? Tell us why.

Hollywood Cemetery. It’s a beautiful, historic cemetery with a lot of cool statuary and monuments, and that’s like catnip to me! I LOVE gorgeous cemeteries!

Belly up to the bar

One of your main characters is a bartender. Tell us what drinks he most often makes for his customers.

In a bar like Treddy’s, Sonny mixes a lot of martinis. It’s that kind of place.

While I’m sure Sonny can mix up anything, I think he prefers it simple. Like a Black Russian straight up. Equal parts Kailua and good Vodka in a chilled martini glass. Good for what ails you!

It’s obvious you really know the landscape your characters traipse across, did some research. But not all research finds its way into the fiction. What interesting tidbits did you learn about something or someplace in your book that didn’t end up in the story?

We lived in Richmond for two years, so that was a big advantage! There were so many really wonderful places I would have loved to include, but the story didn’t need them. Agecroft and Virginia House are two beautiful old mansions dating back several centuries. Maymont has an amazing garden and another, newer mansion. Lewis Ginter Botanical Gardens is breathtaking and features such a wide range of plants and settings. The azaleas on Monument Avenue are huge and blindingly colorful. So many pretty things!

Give us a hint

Are there more books planned with your dashing duo? What locales are you considering … since they have a home on wheels? Can you give us the first few lines of the next novel?

Yes, at least six and maybe more. The next novel, Dark Rivers, takes place in Pittsburgh, chasing down another of Gremory’s witch-disciples and trying to save the intended victim. Seth and Evan are new in their relationship and they’re still finding their footing with each other and with hunting. They’re going to have to face down old betrayals and stick together, or they are certain to die separately!

Also, look for a novella, Burn, that takes place between Witchbane and Dark Rivers and provides some insight into Evan’s education as a hunter!

Of course, Badlands, the first book in another new urban fantasy MM paranormal romance, will be the next book out, set in Myrtle Beach. Release date: May.

Badlands is set in Myrtle Beach, on the glittering and tawdry Grand Strand. Simon Kincaide was a professor of folklore at USC until a board member got him fired for his ‘obsession’ with the occult. Now Simon has a shop on the boardwalk where he runs ghost tours, sells occult merchandise and does seances and private psychic readings. His talent as a medium and clairvoyant is real, and all he wants is to be left alone to rebuild his life. But when jaded cop Vic D’Amato asks for his help on a case that’s costing lives and souls, Simon can’t say no, even if it costs him his life and his heart.

You are entrenched in this supernatural genre. What intrigues you about this type of fiction?

I’ve always loved ghosts, magic, spooky stuff, haunted houses, creepy mysteries, supernatural creatures, from the time I was a little kid. That’s never changed. If I have a choice between reading a story set in the real world, and one with paranormal elements, I’ll pick the spooky one every time.

What urban fantasy novels are in your to-be-read pile? Which genre authors do you like to read?

For non-romance urban fantasy, I love Jim Butcher, John Hartness, Simon R. Green, and Charlaine Harris, among many others.

Morgan Brice is the romance pen name of bestselling author Gail Z. Martin. Morgan writes urban fantasy male/male paranormal romance, with plenty of action, adventure and supernatural thrills to go with the happily ever after. Gail writes epic fantasy and urban fantasy, and together with co-author hubby Larry N. Martin, steampunk and comedic horror, all of which have less romance, more explosions.

The tour giveaway is for a 25.00 gift certificate