I Measure My Life in Dog Years 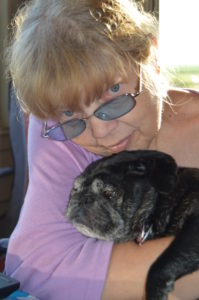 I really do … count my life in dog years. The number of years I share with dogs.

I only briefly did not have a dog, and that was when I graduated college and moved to Quincy, Illinois, and rented a wholly dumpy apartment (which I could barely afford) that said “no pets.” I paid my rent for a few months and then asked the landlord if I could get a dog. He said he’d mull it over, and I said I’d be looking for another place.

He said “yes” in the next sentence. I guess I was a good tenant. And I did not grow pot … like the two girls upstairs did, and who attracted the attention of the police.

Said dog, a mutt named Purple, lived to be two months shy of making the legal voting age. Purple was dealt a great hand of cards. 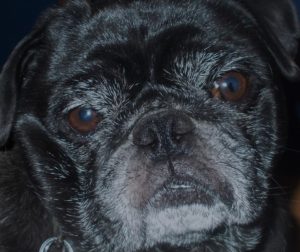 Wrinkles, my beloved pug … he’s not destined for such a lofty number of dog years.

He’s heading toward twelve, a good age for a pug … though I’ve seen pictures of pugs on Facebook purported to be sixteen and seventeen years old. And no matter how much I spend on dog food (buying Exclusive, a top brand, in Savoy) and supplements, I can’t stave off the maladies of the years. Dogs, like people, are dealt different cards regarding aging.

I’m writing this post about Wrinks because several friends have asked about him, and I thought I’d cover it just once, here. 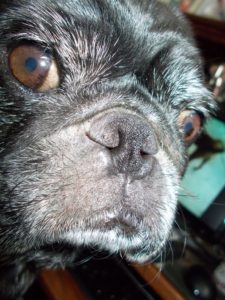 He’s been “fecal incontinent” for the past eight months. I’m not gonna go into that. You can look it up. I carry paper towels and little bags in my pocket, and so I deal with it. He’s happy. I have laminate floors and an unlimited supply of patience. Life is good. He has breathing issues (about two years ago he had surgery to remove an inch and a quarter of his palate to help). And he has this big cyst (big for a little pug) dangling from the inside of his leg. My husband calls it Wrinks’ second penis. It’s ugly and sometimes oozes. As I said, I have paper towels, and my patience cannot be exhausted … with dogs.

Don’t think I haven’t been to the vet’s. Wrinks goes more often than he needs to because the vet is close here in my tiny town and I am a caring “dog mom.” The vet says his heart is good. (I know. He’s a very good dog, my Wrinks.) It’s just some other things that aren’t in as top-notch order. We’re watching the cyst–it isn’t cancer–and hoping we can avoid surgery. The vet drained it once, but it came back. Said vet doesn’t think surgery is the best option given Wrinks’ age and breathing issues. So … paper towels and we’re doing well. 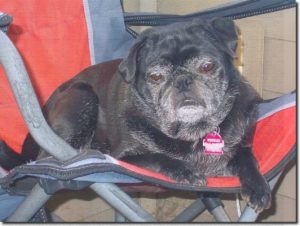 I love dogs. I love Wrinkles endlessly. And I will baby him and pick him up so he can sit on the couch or lay at the foot of the bed. I sneak him green beans, chicken, and pieces of cheese when my husband isn’t looking. Well, maybe Bruce looks sometimes, but has the good sense not to say anything. I take him for very short walks, to the end of the driveway and back, as he has arthritis and huffs if we go farther. When I had a patio poured last summer, I had them make little steps … three and a half inches high … to accommodate my pug. 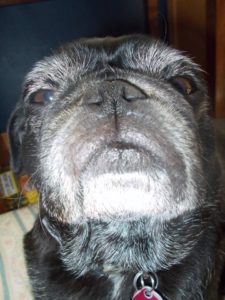 I had pugs when I was a kid. They are among my very best childhood recollections … and the worst memories when they left me. I wanted another pug when I was out on my own, but couldn’t afford one. Purple, the mutt I mentioned earlier, was a $30 dog. She’s what I could afford when I graduated NIU and got my first newspaper job–which didn’t pay much.

Bruce knew I loved pugs, and so when we moved to Wisconsin, we’d stop at the pet shop that often had them … just so I could look. Bruce was fond of going there because he liked to see me happy. But he said he would not allow a pug or any other “smooshy faced” dog in the house. (That was a mistake: don’t tell me what I can’t have or can’t do. That only makes me more determined.) He said he loved dogs with proper snouts. In fact, we had two dogs in Wisconsin, both with “proper snouts.” And I treasured them dearly. But I still wanted a pug, maybe to recapture something of my youth. More, I think, just because I adored the breed.

Anyway, enter Jean Rozinski. She was a marvelous dog groomer who lived in Kenosha and who happened to come across a missive on the internet about a woman needing to “re-home” her pug. She forwarded the message to me.

I acted on it IMMEDIATELY. I reached out to Juliana, an incredible woman who at the time was in the Air Force in Dayton, Ohio. (I dedicated my mystery, The Dead of Winter to Juliana, because indeed she is incredible.) 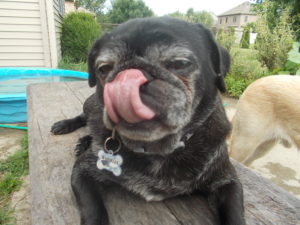 I was keeping this all secret, of course, intending for Wrinkles to arrive during the week when Bruce was at work. My office was in our house, which would make this convenient–I’d be home and Bruce wouldn’t. Juliana and I connected, and she was going to bring Wrinks over for a meet-and-greet.

In the meantime, we went out for pizza with a gathering that included Jean Rozinski. She leaned down the table and asked me: “Are you going to get that pug?”

I swore Bruce’s eyes popped out of his head. It was the most horrified startled expression I’d seen.

“What pug?” Bruce was still shell-shocked. 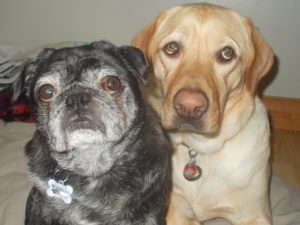 The discussion wasn’t pleasant in the car.

But I was determined. I was not going to back down.

Juliana arrived with Wrinks, and we all hit it off right away. I told her to consider it a foster, and that if she ever needed her little dog back, I would hand him over. And in all the eight years since I was worried she would take me up on that.

He is my shadow, stretched across my feet this very moment. He is my heart. He has to know where I am, and insists on joining me. He sleeps with his head on my foot, probably so that if I move he will wake and can follow me.

I don’t know how much time I have left with him. I hope a long while. He played yesterday. Played! And that is a marvelous sign.

Bruce says maybe he will reach sixteen or seventeen like one of those pugs on Facebook. It’d be glorious, eh? But I’ve a bad feeling that won’t be the case. 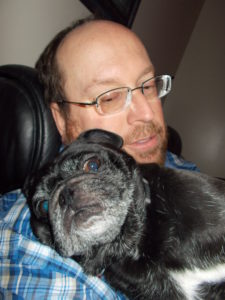 By the way … through the years I’ve caught Bruce on many occasions kissing the top of Wrinkles’ head and giving him a taste of ice cream. Bruce apparently decided eight summers ago that smooshy faced dogs were fine.

I put Wrinks in my Piper Blackwell mystery books. He’s in The Dead of Summer, which I’m working on now. In fact, I’m going to close this column and take my laptop on the back porch. It’s a glorious day, and Wrinks can lay at my feet in front of the fan. And when he hears a train … ’cause his hearing still works a little … he’ll jog outside to the back of the fence and bark quite sternly.

He’s been keeping the trains out of my backyard ever since we moved here.