In a handful of days my next Piper Blackwell mystery comes out: The Dead of Night.

It opens with a character called Mark the Shark.
I met all three of him in Quincy, Illinois.

My father-in-law lives in a senior apartment complex in Quincy. On one of my visits I saw a fellow in the lobby reading a Stuart Woods book. I, too, read Stuart Woods books, so I stopped to chat. My husband had warned me not to, saying that the gentleman would latch on to anyone willing to pay attention to him. He said I wouldn’t be able to get rid of him.

Fortunately, I didn’t heed the warning.

My husband was right…he latched on. Marc had as many lines on his face as old tree bark.

“I get lonely,” he said. Marc went on to tell me that he’d given his car to his grandson, and that said grandson would be picking him up in the morning to drive him to a funeral. 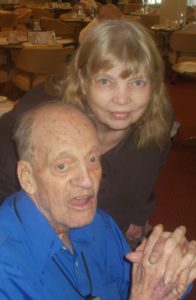 I learned he had two loves in his life. A wife who’d died many years ago, and a girlfriend he met at the retirement center and wished he would have married. She’d died several months back. He carried an eight by ten picture of her in a tote bag to show people. He missed them both, yet he counted himself lucky and blessed to have known and loved these two women. His grandson occasionally took him to the cemeteries so he could put roses on the women’s graves.

Marc worked as a welder with my father-in-law, traced their association back more than sixty years, recalled when my father-in-law took a swing at him ‘cause he was wearing a Kennedy for President button. He’s not a Democrat anymore. Not really a Republican, either.

He said he loved mystery books…and we adored many of the same authors: Tami Hoag, Robert Crais, Michael Connelly, Lee Goldberg, Preston and Child, and on and on. We chatted about Harry Bosch and Elvis Cole and Aloysius Pendergast. He said he was particularly fond of authors that only hinted at bedroom scenes, leaving it to the imagination rather than blatantly describing sex acts; he said the better authors could tease you.

On the next visit to my father-in-law’s place, I gave Marc a copy of The Dead of Winter, my first Piper Blackwell book.

On another visit he pronounced the book “excellent,” and said I had made his favorite authors’ list.

He asked what kind of music I liked. I said classical and country. Marc serenaded me with a few moldy oldies I’d not heard before, then ended it with Good Ol Rocky Top. His voice wasn’t bad.

“Thanks for talking to me,” he said after every visit.

I told him I’d find a way to slip a piece of him into my next murder mystery—The Dead of Night, which releases September 15. I found just the spot for him in sleepy Spencer County, Indiana, someone for my sheriff to interact with. I put him in the opening scene.

But he’s not alone on that park bench. I created the Mark the Shark character based on my conversations with him and with two other men from the senior apartment complex, Navy veterans all. One of the men, Jim, is 102. The other man, Jerry, is my father-in-law; he recently turned 90. All three told me stories of their days in the Navy. I took lots of notes. 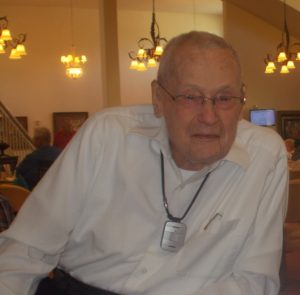 Though Mark the Shark is fiction, he was inspired by these three veterans, and some of the tales the Shark tells in The Dead of Night were things that happened overseas during these men’s deployment. I even used the real ships they were stationed on.

I’m fond of Mark the Shark. I hope you’ll like him too. 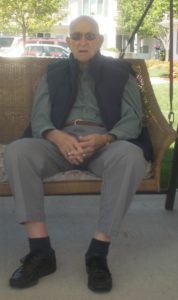 Here’s a piece of the opening scene with him:

He scooted over, making room for her. She guessed him to be in his early eighties. Twin canes were hooked over the top slat, and he wore a bulky jacket. The dispatcher had mentioned he was a geezer—“a whack-job paranoid geezer likely visited by aliens” were the exact words—and said that he claimed it was urgent and he would only speak to the sheriff…and only at this time and place.

“Evening, Mr. Thresher,” Piper said as she sat, keeping a good foot between them. He was redolent of old-man smells—warring liniments and too much aftershave. She swiveled to face him, took off her hat and rested it on her knees.

His voice was gritty like sheets of sandpaper rubbing together, a smoker’s voice, though she didn’t detect a hint of nicotine. She tipped her head and found the scent of the nearby river and the headiness of the sodden ground. More lightning speared the clouds, looking like metallic threads embroidered on a garment.

“You were in a war of sorts yourself,” Mark the Shark continued. “Read it in the newspaper last fall. That was a few weeks before the election. Read all about you.”

“That’s why I voted for you. I like folks with military experience, serving the country and all. Patriotic. Didn’t matter to me that you were what—”

“Twenty-three.” She still was. Her birthday was five months away.

“Yeah, didn’t matter that you were a pup. The article said you were Military Police. I figured that’d make you an excellent sheriff…just like your dad. Good man, Paul Blackwell. Good sheriff.” A pause. “Despite his politics.”

USA Today Bestselling author Jean Rabe has written 37 fantasy, urban fantasy, and science fiction novels. The Dead of Night, her 38th, is her second Piper Blackwell mystery. She has roughly 100 short stories in print, has edited a couple dozen anthologies, and has edited more magazines than she cares to tally. When she isn’t writing or editing, she tosses tennis balls to her cadre of dogs, visits museums, and tries to find gamers who will play Axis & Allies with her.

My Amazon author page is here