Bruce and I celebrated our anniversary at the end of February with a trip to Peoria, Illinois. Nothing exotic, eh? No tropical breezes. I sooooooo would have liked a tropical breeze to chase away this hanging-on winter. But we had a great time.

There was this MASSIVE country concert. Lauren Alaina opened, and she was fantastic. The other acts included John Anderson (yeah, the audience sang along to We Were Swinging), The Bellamy Brothers (who looked long in the tooth, but who were amazing), Trace Adkins (oh my), and Blake Shelton, who hosted the whole thing. Four hours of country music in a packed venue. The music was truly wonderful, and you could feel the beat rise up through your feet in the stands.

I found a lot of fodder for my fiction in Peoria. We’d went to the Civic Center early so we could get a good parking space. That gave me ample opportunity to sit there with my notebook, jotting notes about people, their dialog and mannerisms. I was even so bold as to stop strangers and just chat, taking notes as I went … everyone accommodating. We got to watch the “merch” set-up, which is the big vendor for t-shirts, mugs, jackets, etc. Did you know that there are a few full-time t-shirt workers who travel from stop to stop with the band, complemented by a dozen local workers hired for just the day? They start their set-up about four hours in advance of a concert, and don’t finish the tear down until about three hours after in the proverbial wee hours. The workers can buy t-shirts after that for half-price. Fans shelled out more than half a million dollars for t-shirts at the previous Bob Seger Peoria concert, part of his farewell tour. We didn’t stick around after the show to ask the t-shirt boss how much Shelton’s memorabilia pulled in. But I was curious.

Anyway, this is all fodder for my fiction. Part of my next Piper book takes place at a country concert at the Spencer County Fair. So all the notes I took are coming in handy right now.

What does this have to do with Judgmental Judy?

Before the concert we went out to dinner at a local steak house … the kind of establishment where you crunch when you walk because there are peanut shells on the floor. I watched the nearby diners, a habit of mine, and took more notes for characters. There was this woman on the far side of middle age, wearing a pink sweater and red lipstick, and she whispered loudly to her companion. One of those loud whispers where you could hear her three tables away. We were three tables away. She was judging everyone who walked into the place … didn’t like the looks of one man because his blue jeans were faded and thin at the knees. Didn’t like another man because she thought his hair was too long. Really took issue with a young man who kept playing with his beard. “If that asshole lived in my house, he wouldn’t have that beard. I’d make him shave it, or he’d be gone,” she said. I’m thinking that he’d move out on his own. Anyway, she went on and on griping about people she didn’t know, including the waitresses, who were friendly and helpful. She bothered me.

Back to the concert.

I’m sitting in a chair to the side, Bruce next to me, and I’ve my notebook out jotting down people, dialog, and the like, and this fellow strolls past us. Thirties, wife on one arm, little girl (maybe age six or seven) holding his other hand. He wore pressed blue jeans, cowboy boots, had a lanyard around his neck showing that he’d paid $300 extra dollars for a meet-and-greet with Blake Shelton, and a black polo shirt. On the front pocket was a flower burst and the letters FO. On the other side of the shirt, in type that filled up the entire back, were two words: FUCK OFF.

He had a little girl with him.

He was in a place with thousands and thousands of people.

And he wore that shirt.

The Judgmental Judy in me raged. I deemed him a jerk, self-centered, rude, etc. etc. etc. Over dinner, watching the woman in the pink sweater, I’d told myself I would not judge strangers. But here I was. That FO man twisted my stomach and my sensibilities. I judged him a waste of space.

Later, during the concert (we had great seats), we spotted him down on the floor, not far from the stage. His VIP lanyard got him there. And in the lights, the words on his shirt glowed brightly. Pissed me off.

Soon I realized he was pissing off a lot of folks. All the people sitting next to us, below and above us, growled about him, thought he should have been made to change or should have been kicked out, VIP pass or no. One woman said it was as if he was cursing at everyone in the civic center; she was angry about it.

If he had enough money for the VIP pass, he certainly could have bought a Blake Shelton t-shirt and wore it instead, she suggested. Her companion–her mother–said the seller should have just given him a t-shirt and asked him to wear it.

A lot of us were Judgmental Judys at the concert regarding FO man. And the FO man will appear in one of my books. Something nasty is going to happen to the character … which will give me some measure of satisfaction.

Other than the FO man, it was a perfect time. My favorite performances: Blake Shelton singing “Austin,” “Ol Red,” and Trace Adkins teaming up with him on “Hillbilly Bone.” 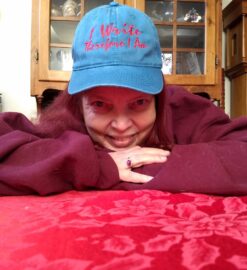