I entered a contest this past spring, the Soon To Be Famous Illinois Author Project. My buddy Don Bingle told me about it and encouraged me. AND … pretend you hear a drum roll … I won. Two categories for indie-published authors, Adult Fiction and YA, and I took the adult title with The Bone Shroud, my mystery-thriller set in Italy. The award is beautiful, and it is sitting on the bookshelf in the dining room at the moment, but I’ve decided it’ll come into my office … where I can look at it more often. 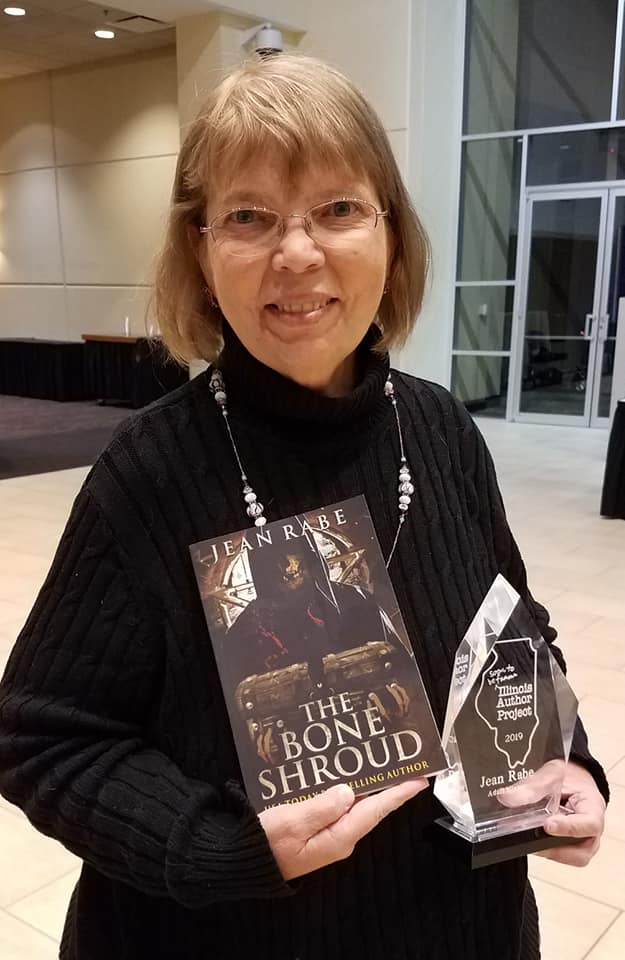 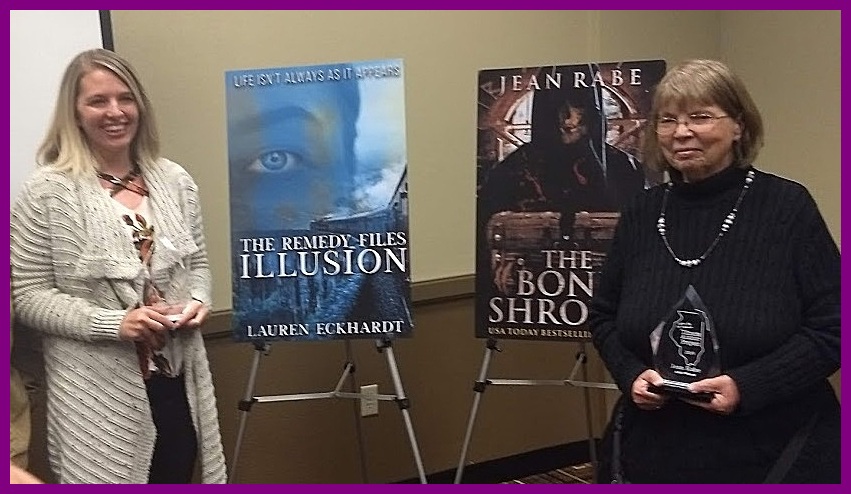 The annual competition, voted on by librarian judges across the state, recognizes excellence in indie publishing. The judges said they likened The Bone Shroud to “Dan Brown in flavor.” Pictured with me is Lauren Eckhardt of Bloomington, who won in the YA category.

I will receive statewide recognition by Illinois libraries as the top indie-published book in the adult genre; a $500 prize; opportunities to promote my books at Illinois public libraries; inclusion in a full-page print spread in Library Journal; print book sales to Illinois public libraries; inclusion in Popup Picks, a mobile media curation service offered by Reaching Across Illinois Library System, for three months; an opportunity to compete with other Indie Author Project contest winners for the Indie Author of the Year award; and honors at the Public Library Association Conference 2020 reception in Nashville. The prizes are sponsored by BiblioBoard, RAILS (Reaching Across Illinois Library System), and the Illinois Library Association.

The Tinley Park Convention Center is HUGE. I’d imagine it would be a great venue for a game con. Bruce drove–thankfully, as I was still shook from that woman in Kenosha plowing into the car–and we sat on a bench people watching for a while. I love to people-watch; it gives me ideas for characters. A lot of the folks passing by looked like librarians, or how I picture and remember librarians. Then there were some who looked like they had stepped out of the 1960s, a handful of people fancifully attired (including a woman in a brown velvet formal), young men who could have passed for high school and college students, and scattered elderly men who had “speaker” badges. It was wonderful to watch them all.

Some people had badges that said “Ask Me.” And so I asked one of them what the badges were for; they designated people who were involved with putting on the convention. A lively, interesting, and sadly sobering discussion followed about increasing drug use in public libraries. I’d seen a program topic: Opioids Among the Shelves, and so I asked about it. I’m going to use some of the information in one of my mystery books.

The reception was lovely … wine, strawberries, bacon-wrapped asparagus. The speeches were short, and then they presented the awards. I was honestly surprised, though Bruce and Don were confident I would win. Then there were all these people standing around with cameras and cell phones, all of it overwhelming and terrific. They interviewed me for some program, and the cameraman said I did fine, although I was NERVOUS. I don’t think I have a terrific speaking voice.

I figure I’ll be Snoopy Dancing for quite a while over this.

About The Bone Shroud

Irem Madigan’s wedding trip to Rome turns into a desperate search for historical relics, and a struggle to stay ahead of a killer. Irem, an archivist at the Chicago Field Museum, flies to Italy to be the “best man” in her brother’s wedding. He’s marrying an archaeologist who lures Irem into a centuries-old mystery. Unfortunately, there are other players in the game, and some of them are playing deadly. Can she survive and uncover the ancient secrets?