Pineapple and Agent Down 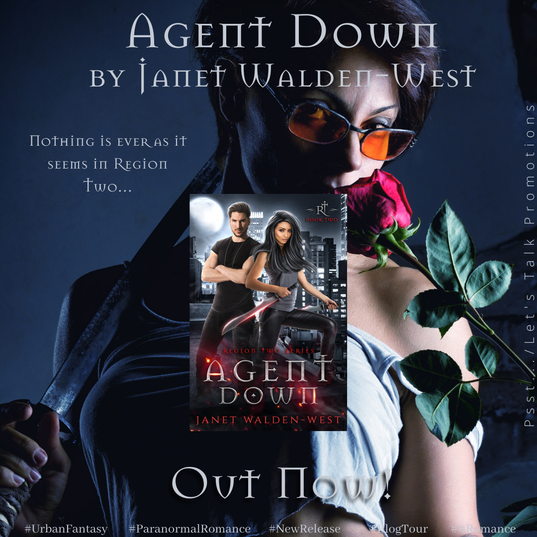 It is my pleasure to host a stop on Janet Walden-West’s blog tour. Because reading her books is a pleasure. I love her writing. Janet was gracious enough to indulge me by answering a few burning questions about her work and life.

What is your favorite bit of dialog from the book?

My hero is a civilian, suddenly dropped into a government group that gives shady new meaning, and raises its agents from childhood. So the team has a patchy, odd understanding of civi culture, primarily gleaned from TV and movies. He has just invited our girl to meet his parents.

He took his glasses off, then replaced them. Tone cautious, he said, “Dinner at my parent’s. With my brother and sister, and their spouses. In all likelihood, all three nieces as well. That dinner?”

“What should I pack? Is there a standard having-dinner-with-your-boyfriend’s-family dress code?” I chewed on my thumbnail. “This is going to require research.”

He caught my wrist, like I was going to bail and start checking right now. “Rom-con movies aren’t research.”

Do you have a quirky writing ritual or habit? I’m pretty low-maintenance when it comes to writing spots while I’m working on a manuscript draft. My office, waiting to pick kids up, between classes at dog shows, coffee shops—all equally good. Although if I was ranking sites? Coffee shop, because, coffee.

Once I start edits though? Creating changes and controlling the ripples throughout the story that result seem to require a different, totally focused headspace. I need to retreat to a writing cave, or at least my office with the door closed.

Reformed pantser. All the way.

What one piece of advice would you give other writers?

Don’t be afraid to jump in, and put your writing out there. There are tons of formal and informal writing groups, especially online—I met ½ of my amazing crit partners via Twitter. Make friends. Share your work. Learn from helping each other.

Has covid changed your writing, either in your approach or plot and characterization?

The vampires in the Region Two world are created by a virus that radically transforms their DNA. I wrote the series last year, and didn’t start with the intent of straying outside the usual vampire cannon. The further I got into the first story though, the less the supernatural angle seemed to fit. Writing Bruce and Vee’s story turned into my safe space when the world was in upheaval.

Uh, yes. Pineapple, with or without ham, is the pinnacle of pizza creation.

Janet Walden-West lives in the Southeast with a pack of show dogs, a couple of kids, and a husband who didn’t read the fine print. A member of the East Tennessee Creative Writers Alliance, she is also a founding member of The Million Words craft blog. She pens inclusive Contemporary Romance and Urban Fantasy. As a two-time Pitch Wars alum turned Pitch Wars 2019 Mentor, Sherrilyn Kenyon scholarship recipient, and Golden Heart® finalist, she believes in paying it forward by supporting burgeoning Southern writers.
She is represented by Eva Scalzo of Speilburg Literary Agency.

Find more about her at janetwaldenwest.weebly.com or on social media.

At the top of the steps, he veered right for the kitchen, while Liv and I went left for my office.

Kimi met us in the wide hallway and signed, “I switched out drones for the two low-light infrareds and have one over the park neighborhood. The other is working outward in concentric circles, to a five mile radius of the attack.”

“Jace said the Cleaners are already back at HQ with the specimen,” Josh added from over Kimi’s head, appearing and hanging from the corner of the office doorframe, flicking at her long, copper-tinted curls even though they were nowhere near his face, much less interfering with his view.

Average height and the kind of willowy that hid muscle, adding to her deceptively sweet appearance, Kimi elbowed him in the ribs hard enough he grunted. She wasn’t hearing impaired, but had lost her voice in a training exercise gone wrong as cadets.

She signed to him, “Have him message me.” She grabbed one of her dozens of tablets, off to monitor law enforcement and city calls, and hit up our street contacts. And apparently, Jace, Josh’s twin. He was stuck at HQ recuperating from a mission that left him the only survivor of his team.

I spun the old leather chair and plopped my butt down. A puff of stale cigar smoke rose, decades after the C.O. responsible had gone. Technically we had enough time to shower and eat before writing and sending the mandatory post-mission report. Reaching over, I pulled my laptop close and opened it, putting everything I’d seen and done into the report. My team wasn’t ever going to have to endure what Jace’s had.

On the opposite side of the desk, Liv rolled her chair in, doing the same with her report. Standard procedure, and sometimes the dual points of view caught an issue or potential lead the other had missed.

Hers wouldn’t say anything about the flash of silver I’d glimpsed. It could have been the rising moon glinting off the soccer net’s metal frame. Certainly no other explanation had turned up, no hint of another vampire, despite my and Liv searching and then the Cleaners doing a meticulous sweep.

My gut wasn’t sold though, and neither was I.

I dimly registered Liv leaving, and Kimi darting in and out, checking classified items and reports that were only accessible through the link in my office.

My hand was on the laptop lid, finally ready to close it, when a ping sounded. The Lab’s pathology report on the vampire popped up, also standard procedure. The file opened, and I fast-scanned it. Then slowed and paid more attention to the summary.

There was a note on the vampire’s endocrine system showing signs consistent with disease, or at least signs of alteration. Except once the virus responsible for altering a human into a vampire multiplied and took over, it repaired any damage that would impede the predator in hunting and feeding, its base directive.

Scrolling further, things got weirder. The vampire was seriously underweight. I.E., starving. Again, not hella likely since even a desiccated vampire would reflexively strike at anything warm blooded, the virus’ DNA-encoded self-preservation at work.

Sure, the creature had attacked me, but…there had been an entire, active neighborhood available. It had to have already been there, hiding somewhere out of the sun’s reach. Meaning it should have gone for a family or jogger whenever it first arrived.

A pair of footnote numbers, no text, were appended at the bottom. Those were marked Level Seven clearance. As a C.O., I was Level Six. Seven and Eight were the top tiers, Assessors and Oversight, respectively.

When I hovered over the links, they opened. I hesitated for a fraction of a second, then began reading.

Bargaining with the enemy always has a cost—and mine has come due.

VEE:
Remember that way hot, way arrogant chef I rescued? Turns out, he’s my soulmate.
Despite Bruce’s lack of a filter, life is all good in Region Two.
Cryptids stalking the city’s shadows.
My team stalking the cryptids.
My sisters using our fav rom-coms as a study guide for meeting your civilian boyfriend’s parents.
I always believed cryptids were the greatest danger out there. I was so, so wrong. There are some tragedies even agents and Company resources can’t combat. A hopelessness that threatens to shatter the team and my heart.
Until I accidentally uncover an ultra-classified miracle. Hacking research above my pay grade isn’t the worst of my sins. What the research points me to requires betraying the Company, my team, everything that makes me–me.
But if this deal with the devil saves Bruce? I’m okay with the sacrifice.

BRUCE:
We’d gone through a different kind of battle and come out more in love than ever.
Vee thought we’d won. Hell, so did I.
Except there are things Vee never told me. That there was a price for saving my life. That Vee’s the one who has to pay. And now I’ve lost the woman who I love with every cell in my body.
When the Company discovers what she’s done, the verdict is treason, the punishment, death.
They’re about to meet Bruce the Bastard though.
There’s no power—human, government, or cryptid—that can keep me from saving Vee.